No Grant For You! Congress Strips DOL Misclassification Grants to States

The Department of Labor recently announced it has awarded $10 million in grants to 23 states to combat worker misclassification in state unemployment tax programs.  This is the second year that states have received funds to improve information sharing systems, conduct audits and provide outreach to help educate employers on compliance.   In FY2014, $10.3 million were granted to 19 states to aid in this effort.

New York has been among the states recognized by the DOL for its efforts to curb misclassification, but as with many states the level of non-compliance remains high.  In its 2015 report, New York’s Joint Employment Task Force (JETF) reported there were 26,000 instances of worker misclassification and it assessed $8.8 million in unemployment contributions.   “Based on research and statistics,” the JETF report concluded, “the construction industry has some of the highest incidents of employee misclassification.” Their sweep of only six construction sites resulted in the discovery of nearly $2.7 million in unreported wages, nearly $104,000 in unemployment insurance contributions due, the imposition of fraud penalties and the identification of nearly 230 misclassified workers.   A copy of the JETP report may be found here. 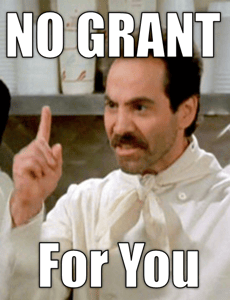 Unfortunately these grants to states will not continue.  Recently the National Association of Home Builders (NAHB) and the little known Coalition to Promote Independent Entrepreneurs successfully lobbied Congress to strip the DOL grant money for worker misclassification efforts from the 2016 federal budget.  These cuts come at a time when the misclassification of independent contractors is at an all-time high.  Many government and university studies estimate the cost of worker misclassification to federal and state budgets at somewhere between $2-3 billion per year.

What does this mean for employers?

The DOL, through information sharing agreements with 26 states, will continue its efforts to ensure workers are treated fairly and classified correctly.  When agencies’ budgets are cut, however, the impact to employers is multifold:

The grants provided to the states during FY2014 and FY2015 are tiny fraction of the federal budget, but their loss could have substantial negative impacts on the states’ future abilities to collect unreported unemployment taxes.  During the Great Recession, most states had to borrow money from the federal government and private sources to fund unemployment payments.   These loans are now coming due, and states must begin to repay the loans while restoring their unemployment trust funds.   Although some states have recovered, the Department of Labor in State Unemployment Trust Fund Insolvency Report found  “only seventeen states have reached what is considered the minimal level of adequate solvency.” Given the current conditions, Congress’s elimination of the 2016 grants appears shortsighted and will only decrease states’ abilities to collect unpaid taxes and stabilize unemployment funds.

Written by
Cynthia Waddell
Get to know Cynthia:
Cynthia is a Senior Compliance Specialist at Populus Group. She has over a decade of experience with the 1099 independent contractor issue, including support of Fortune 500 clients.

Cynthia resides in San Mateo, California with her husband Allen, and a very spoiled poodle named Jackson. Like most stereotypical California transplants, she enjoys good wine, great friends, and likes to “do brunch.”